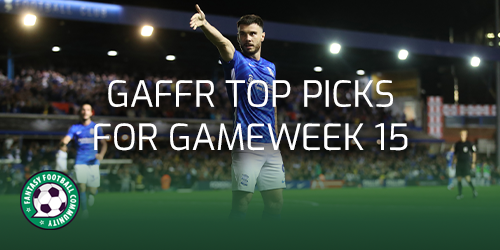 We go through the GAFFR top picks for Gameweek 15 using stats, form and fixture ahead. After a busy double in Gameweek 14, we look ahead to the new round ahead. Gameweek 15 starts on the 15th of October. This means managers have plenty of time to get their teams ready.

Going through the GAFFR top picks for Gameweek 15 can be hugely beneficial. As fantasy managers we are always looking for players who could do really well in the next round. For that reason, picking out some of the best assets for the Gameweek ahead can be detrimental to chase down the competition.

Although Birmingham have been inconsistent this season, they come up against the worst defence in the Championship. In the 13 matches they have played so far, Hull City have only kept one clean sheet. What is even more exciting is that they have also conceded two or more goals in a whopping nine of their matches played.

Scott Hogan comes in at just £6.1m, already an appealing factor contributing towards investment. The striker also ranks in the top 10 scoring players in his position in GAFFR. Hogan’s impressive 63 points consist of five goals and one assist. With a fantastic fixture ahead, the Birmingham man could have plenty of potential.

Preston come up against Stoke in Gameweek 15. Stoke have been one of the most inconsistent sides in the league. This is reinforced by the fact they sit 16th in the Championship. Stoke have already failed to score in four of their matches so far and Preston have one of the best defences in the league. In the 13 matches Preston have played they have kept a huge nine clean sheets.

One of the best GAFFR assets of the season so far has been Preston defender Robbie Brady (£5.3m). At such a great price, Brady is currently the joint highest scoring defender in GAFFR. Not only has the Irishman gathered multiple clean sheets but he’s also picked up two assists. With great clean sheet potential and some attacking threat, Brady makes the GAFFR top picks for Gameweek 15.

Norwich are currently second in the division. This could indicate investing in their assets a good idea. In the 13 matches they have played, Norwich have only failed to score once. They play against a struggling Watford in Gameweek 15. Watford are really struggling to gain consistency and that is telling in their previous form. They have picked up just one win in their last five matches whilst also losing three of them. In addition, Watford have also conceded two or more goals in four of those same matches.

A huge contributor to the Norwich form is Josh Sargent (£7.8m). Sargent is now the leading points scorer amongst all forwards in GAFFR. His 87 points derive from his seven goals and two assists created. With a team to target in Watford ahead, Sargent could easily extend his lead at the top of the pile.

Keep up to date with our GAFFR content right here.