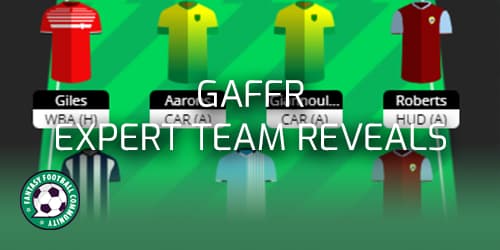 The first game of the Championship season kicks off tonight. Here we take a look at some expert team reveals from the Twitter GAFFR community. Some of the best managers in the GAFFR community sharing their drafts as the deadline approaches we get the opportunity to see which players their backing.

The first game week of the season starts later today with Huddersfield v Burnley. GAFFR managers will be checking out competition as we draw closer to kick off. This could even give an indicator of who could be well owned.

A reminder that deadline is only hours way with managers having a 6:30pm UK time to prepare there teams ready.

Regular GAFFR manager and Fantasy Football Scout pro pundit claimed 1st place for a large part of the Championship campaign last season. Overall for what was an incredible season in GAFFR Andy managed a successful overall finish of 12th in the world.

With the popular 4-3-3 formation Andy has included GAFFR community must haves Aarons and Pukki of Norwich. In addition he has also put most of his money into his starting 11 including West Brom summer signing Swift, another player many will likely own.

@FPL_Beery has gone for an interesting formation with big at the back. There was so much value in defence last season and Spencer is making the most of that here. Taking both of the Middlesbrough wing-backs Jones and Giles with Aarons and last seasons top performer Bree with new Burnley signing Maatsen.

Choosing a well owned front line which could balance out the aggressive backline. Pukki takes the captaincy and will be seen as a popular decision within the GAFFR community.

As you can see @FPLReaction also had a very successful season in GAFFR in 21/22. Managing an impressive 58th in the world GAFFR content creator Louis will be looking to aim even higher in terms of rank in the new season.

With a flexible 4-4-2 Louis has brought in a triple up on Norwich assets including GAFFR favourite Pukki and a double defence of Aarons and Giannoulis.

Backing the Luton striker Adebayo which could be a standout from the potential template. New signing Twine came in for Burnley and Louis has given him a shot hoping his minutes stick.

Content Creator FPL Corf will be looking for a successful season too. The regular fantasy games player and Twitter thread maker has backed the seemingly favoured 4-4-2. Draft regulars Weimann, Piroe and Pukki all feature after successful seasons last time out.

With most of his money in his starting 11 FPL Corf will be hoping there isn’t any non starters within his line-up.

Top GAFFR manager FPL Irons and seasoned Championship fan reiterates the excitement the community has for the start of the campaign. Similar to Spencer FPL Irons has opted for a back five but with the double Middlesbrough wing-backs along with Tymon, GAFFR favourite Bree and Norwich man Aarons.

Backing the early good Coventry fixtures the GAFFR manager has opted for the exciting attacking double of Viktor and O’Hare.

For GAFFR content to help prepare your teams check out our whole GAFFR Fantasy section here.