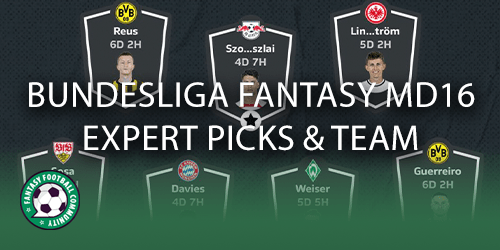 With a new round ahead, we look at the latest edition of Bundesliga Fantasy Matchday 16 expert picks and team. @FPLGunnersaurus (Jay) joins us to give his three top picks for the Matchday ahead. In addition, he also shares his squad going into the new round with his general thoughts.

Twitter is full of the most experienced fantasy football players around. Those managers can be some of the best people to look to when trying to gain clarity when making their own decisions within their teams. Checking out the Matchday 16 expert picks and team can help for the round ahead.

Note: As we head on into the Rückrunde (that’s the second half of the Bundesliga season to save you a search) I currently rank 165th in the world.

It’s important to note a key change Bundesliga Fantasy has implemented during the winter break. The game now has players ‘on sale’ between each Matchday and are available to transfer in up to 10% lower than their normal price.

For example at the moment Dani Olmo from RB Leipzig is available to transfer in for Matchday 16 at 11.5m, instead of his 12.8m base value. Up to 18 players can appear on sale in the transfer market each Matchday (during unlimited transfer periods the number of players on sale may vary) and are selected for sale according to the following criteria:

Originally this spot was going to Frankfurt’s Muani. However Moukoko is on sale, costing 1m less than normal, and has two wonderful standalone fixtures to kick off the Rückrunde with. Moukoko has been on fire at home as of late and Matchday 16 sees Die Schwarzgelben host 14th place FC Augsburg.

In his last three home appearances Moukoko has racked up 39 points, scoring four times and assisting once. The stats also show why you should invest in the Dortmund attack with Augsburg boasting the worst xGA (expected goals against) home (1.99xGA), away (2.27Xga) and overall (2.12xGA). Especially as he’s on sale the German wonderkid is an absolute steal of a buy ahead of Matchday 16.

I for one was devastated when Wirtz suffered a ruptured cruciate knee injury all the way back on 13th March ’22 against FC Köln. Leverkusen’s dynamo was absolutely flying at the time and was one of the standout Bundesliga Fantasy assets, returning double-digit hauls for fun. The good news is that he’s back having started twice and coming off the bench during some mid-season friendlies.

It’ll be interesting to see how boss Xabi Alonso manages his game time, however there’s no reason not to think Wirtz will be straight back into the starting 11. Up first is a tricky tie away to Borussia Mönchengladbach. However the Foals have conceded eight times in their last four home games and Wirtz will want to remind the world what he’s capable of.

Only 5% owned at the moment the Croatian left-back could prove to be an incredible differential for Matchday 16. After a fantastic World Cup campaign Sosa is back in Bundesliga action with a home tie against FSV Mainz 05. I’ve mentioned here before how Sosa’s home form compared to his away form is as black and white as it gets.

If I was a betting man I would be betting on Sosa returning a sensational fourth double-digit return at home in a row here. Stuttgart are an in form home team, having won three on the bounce, and Mainz have lost their last two away games. It’ll be interesting to see if the winter break resets the form of a team going into the second half of the season but if it doesn’t, look for a home win here with Sosa getting in on the action.

You can stay up to date with all of our most recent Fantasy Bundesliga articles right here.