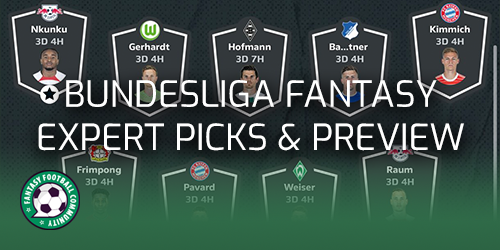 With a new round ahead, we look at Bundesliga Fantasy expert picks and team preview. @FPLGunnersaurus (Jay) joins us to give his three top picks for the Matchday ahead. In addition, he also shares his squad going into the new round with his general thoughts.

Twitter is full of the most experienced fantasy football players around. Those managers can be some of the best people to look to when trying to gain clarity when making their own decisions within their teams. Seeing expert picks and team preview can help for the Matchday ahead.

Going without a Bayern forward in any matchday is dangerous. This was found out by some in Matchday 10 when Bayern steamrolled Freiburg 5-0. Each of their forwards picked up a goal and double-digit fantasy returns. Musiala only came off the bench in that game (after recovering from COVID). However, with teammate Leroy Sané ruled out for three weeks with a hamstring injury, expect Musiala to be even more involved in Bayern’s attacks.

Musiala remains the cheapest way into Bayern’s formidable front line (if you exclude Choupo-Moting). The teenage sensation has already returned five goals and four assists this season. In fantasy terms he’s fourth in the overall scoring charts with 105 points. This includes two monster 20 points+ hauls, despite missing one game entirely and coming on as a sub in two.

Bayern travel to Hoffenheim this Saturday. Hoffenheim are not exactly known for being well beaten at home. But it’s Bayern. Bayern have already put five goals or more past teams like Freiburg and Frankfurt this season. Go without Musiala or any Bayern forward at your own peril!

After missing Matchday 10 due to suspension, Köln’s stand-out player of the season Kainz returns for Matchday 11. He plays in a Friday night game away to Mainz. Köln appear to be having a problem playing Sunday games after Europa Conference League action, having only won the one in four. Playing a game after a full week of rest like this week? No problem!

Köln are undefeated when they’ve had a rest. This has seen them rack up big wins including a 4-2 away win over Wolfsburg and a 3-2 home win over Dortmund. With cup action for Mainz in midweek and a break for Köln, the odds are in Kainz’s favour to return big. All you have to do is look at those wins just mentioned which saw Kainz hit huge fantasy returns of 27 points and 23 points. With four goals and four assists to his name already, expect Kainz to add to those figures under the Friday night lights.

Premium defenders in standalone fixtures are hard to come by this weekend. With most of the top teams playing in the Saturday afternoon slot, you’ll want someone who can act as back-up for your star defender option. Bensebaini can fill that role in the Saturday evening game at home to Frankfurt. Bensebaini has the potential to explode in any game, having already been seen with fantasy hauls of 18 points and 22 points in the last four matchdays.

Even when Gladbach concede, Bensebaini picks up so many points for attacking returns you can expect a decent return even then. Did we mention he’s on penalties too? Frankfurt are shipping two goals on average each away game. This bodes well for potential attacking returns. A clean sheet for the Algerian here would be a bonus against an attacking Frankfurt team. But then again, he’s not being recommended here for his defensive duties.

You can keep up to date with all of our Bundesliga articles right here.