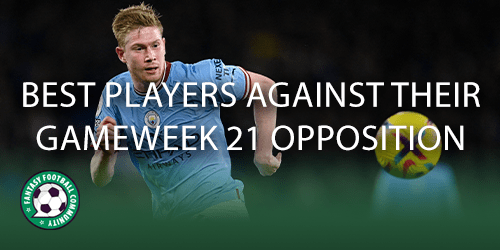 We take a look at some of the best players against their Gameweek 21 opposition. Using previous head-to-head records and underlying stats from the Fantasy Football Scout members area to help us pick out some great FPL picks for the round ahead.

Picking out the best players against their Gameweek 21 opposition could be helpful in making both transfer and captaincy decisions. The more information FPL managers have the better our decisions tend to be in terms of having successful assets in our fantasy teams.

Brighton are scoring plenty of goals lately and their opponents Leicester have been conceding. In fact, the Foxes have conceded two goals or more in three of their last six matches in the Premier League. Managers within the community will be looking to invest in the Brighton attack ahead of this match.

One player who seems to be lacking minutes lately is Danny Welbeck (£6.5m). The striker featured against Liverpool in Gameweek 20 and picked up an assist but his record against his upcoming opponent’s is very good. Welbeck has returned in four of his nine matches against Leicester. Most significantly, the English forward has bagged two back-to-back returns in the last two Gameweeks against the Foxes.

Staying in the same fixture we take a look into the Leicester attack. 36-year-old Jamie Vardy (£9.1m) has had a torrid run of form this season. However, we can’t forget how good he has been. We can see his head-to-head record against Brighton is fantastic.

In the nine matches Vardy has played against his upcoming opponent, he has returned in all but three matches. His returns consist of six goals and three assists, totalling an average of nine returns in nine matches.

Liverpool have been struggling to maintain any sort of consistency lately, especially in defence. Although that is the case it could be worth taking a look at Trent Alexander-Arnold’s (£7.3m) record against his upcoming opponent’s Chelsea.

In the nine matches Trent has played against the Blues, he has picked up returns in six of his matches. His returns consist of two goals, two assists and two clean sheets and include one double-digit haul of 13 points.

Manchester City are in the hunt for top spot as Arsenal continue to extend their lead at the top of the table. They face Wolves team who they have had plenty of success against in the last five matches, winning them all.

As we can see below Kevin De Bruyne (£12.5m) has a fine record against Wolves. In the six matches he has played against his Gameweek 21 opponent, the Belgian midfielder has bagged returns in four of them. Those returns include a massive 24-point haul in his most recent match where he scored four goals.

Tottenham will be looking to bounce back after their matches in Gameweek 20. They face Fulham in the new round ahead. One player who has a very successful record against newly promoted sides is main man Harry Kane (£11.7m).

We can see from the graphic below that Kane has picked up 12 returns in the last 21 matches against promoted sides. The 12 returns consist of 13 goals and three assists. Interestingly before his last return, Kane blanked seven matches on the bounce.

Which players returned the most points in Gameweek 20? Check out the top 10 here.