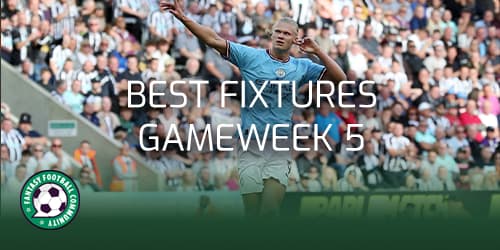 With Gameweek 4 now over FPL managers are tuning their attention to Gameweek 5. To help with these decisions we take a look at the teams with the best fixtures in Gameweek 5.

We have sorted the Fixture Ticker by difficulty and the four teams that sit top are Man City, Leeds, Wolves and Brighton. We take a look at the teams with the best fixtures in Gameweek 5.

Man City are top of the FFScout Fixture Ticker for Gameweek 5. They face newly promoted Nottingham Forest at home on Wednesday evening.

Man City won all of their six fixtures against newly promoted sides during the 2021/22 season. They continued this record of wins against new teams in the league with a 4-0 win over Bournemouth in Gameweek 2.

Second on the Fixture Ticker for Gameweek 5 are Leeds. Leeds have hugely impressed in the opening gameweeks of the season and face a struggling Everton team in the midweek fixtures.

Many FPL managers worried about investing in Leeds ahead of the new season. However, the club who were almost relegated on the final day of the last campaign look totally different this season.

Rodrigo, Harrison and Aaronson continue to look like great investments for FPL managers.

Wolves sit third on the Fixture Ticker for Gameweek 5. They travel to newly promoted Bournemouth.

Wolves haven’t started the season as well as they would have wanted. However, a tie with newly promoted Bournemouth could kick start their season. Wolves will be boosted by the return of Jimenez who will add attacking threat to their game.

Brighton are fourth on the Fixture Ticker for Gameweek 5. They travel to newly promoted Fulham.

The Seagull’s offer FPL managers a number of great options for their teams. All of which come at budget friendly price tags. Sanchez, as well as all of the Brighton defenders look good options. In attack Welbeck, Gross an Trossard all look highly investable.