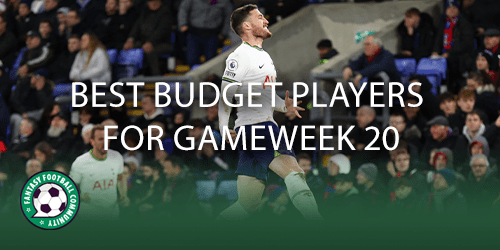 The new round of fantasy football is approaching. For that reason, we take a look at some the best budget players for Gameweek 20 with the help of the Fantasy Football Scout website and its fantastic tools available.

Finding the best budget players for Gameweek 20 could be key for Fantasy Premier League managers. Budget plays can be detrimental in enabling the more expensive options within our teams so including them can help with transfers, captaincy and other important factors moving forward.

Tottenham have a double Gameweek this week against Arsenal and Man City. Although their fixtures are tough, they play with a wingback system which allows their wingbacks to advance into some of the most dangerous positions on the pitch. This increases their wingbacks chances of picking up attacking returns.

One player who looks to be assured of minutes recently is Matt Doherty (£4.6m). Amongst all players in the league in Gameweek 19, Doherty had more shots in the box than any other player. He also picked up a huge 14-point haul because of his goal, clean sheet and bonus.

Amongst all teams in the last six matches no team has scored more goals than Brighton (17). Although inconsistent in results, their scoring plenty of goals. For that reason, their attacking line could be worth investing in.

One of the few options managers could select is Kaoru Mitoma (£4.9m). The Japanese midfielder sits as one of the nicest price-tags in the game for his position. Mitoma has also picked up an impressive four returns in his last five matches. Those returns consist of three goals and one assist.

Brighton have scored two or more goals in five of their last six Premier League matches, scoring four against Chelsea and two against Arsenal. This shows the strength of the Brighton attack and with a potential double Gameweek coming up, they could be worth investment.

Another way into the Brighton frontline could be Evan Ferguson (£4.5m). With midfielders gaining popularity it could be beneficial to go for one of the cheapest playing strikers in the game. Evan Ferguson has collected two back-to-back returns, including a double-digit haul in his most recent game. The striker could also be used as a solid bench option.

Amongst all teams Newcastle rank the best for clean sheets kept and goals conceded, so investing in the Newcastle defence is key. One of the cheapest ways to do that is Sven Botman (£4.4m). The centre back is considerably cheaper than both defender Kieran Trippier (£6m) and goalkeeper Nick Pope (£5.4m). Botman has managed a return in seven of his last 10 matches, reflecting fantastic value.

Keep up with all of our most recent Fantasy Premier League articles, in one place, right here.